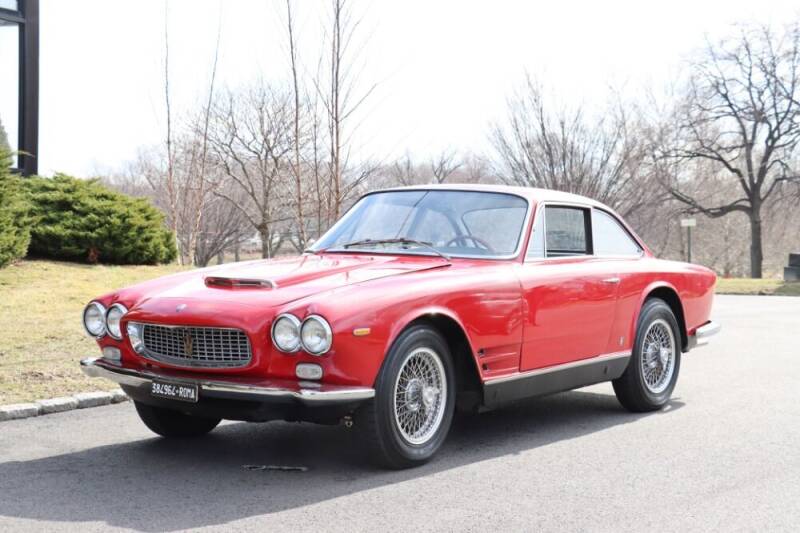 1964 Maserati Sebring Series I Coupe with Coachwork by VignaleThis highly desirable 1964 Maserati Sebring Series I Coupe is an attractive example and excellent driver that was originally born in Bleu Sera over natural leather interior. It is currently red with black interior. A rare Series I model and one of approximately 350 examples built. Elegant Vignale coachwork designed by famed stylist Giovanni Michelotti. An extremely collectible car that's very straight and solid throughout. At the 1962 Geneva Motor Show, Maserati unveiled a new 2+2 Coupe prototype. Aimed primarily at the North American market, it was dubbed the Sebring to mark Maserati's victory in the 1957 Sebring 12 Hours. The final version was finalised shortly thereafter and officially revealed at the Turin Motor show in 1963, after production had already begun. The Sebring shared its underpinnings with the very successful 3500 GT. This was built around a steel tubular frame with double-wishbone front suspension, a live rear axle and all-round disc brakes. Like the latest 3500 GTs, the Sebring was equipped with a fuel injected version of the 3.5-litre straight six engine. Good for around 230 bhp, it was mated to a ZF five-speed manual gearbox and a Borg Warner three-speed automatic was available as an option. Penned by Giovanni Michelotti for coach-builder Vignale, the design for the Sebring was more angular and upright than that of the 3500 GT. It featured striking twin headlights and a small scoop on the nose to feed fresh air into the engine compartment. On the inside, the Sebring sported an additional rear bench seat. In true 2+2 fashion, this second seating row could really only accommodate children. Production of the Sebring ceased in 1967 when 593 examples were built. Among the many great Maserati road cars of the 1960s, the Sebring was often overlooked. In recent years, the Michelotti designed Sebring has finally received the appreciation it deserves. Rare Series I Sebring: One of Approximately 350 Examples Built Elegant Vignale Coachwork Designed by Famed Stylist Giovanni Michelotti Classic Naserati Twin-Cam Inlinse Six with Lucas Mechanical Fuel Injection Delivered New in the Handsome Color Scheme of Bleu Sera over Natural Leather Maintained by Italian Car Specialist Euro-Tec MotorsPrice: $129,500