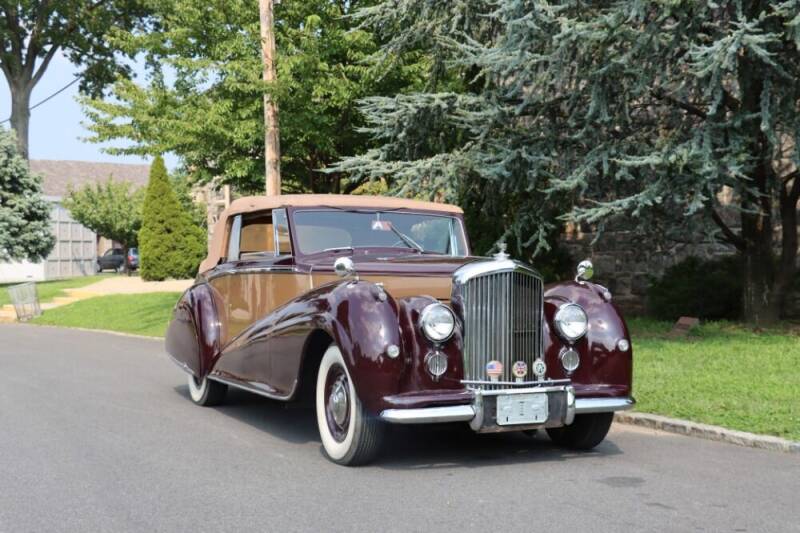 Ready to trade in?
Let us know what you have.
Have additional questions?
Give us a call and we'd be happy to help!

Factory Left-hand Drive 1952 Bentley Mark VI 412- Litre Drophead Coupe: Coachwork by H. J. Mulliner, Park Ward LtdDespite the popularity of the factory's standard steel body, premiered on the MkVI Bentley, a coachbuilt alternative remained the preferred choice of many customers. Indeed, anyone desiring a soft-top Rolls-Royce or Bentley had no alternative but to commission one from an independent coachbuilder, there being no factory-built alternative at this time.With the passage of time many Mark VIs have lost their original bodywork, in many cases because it had deteriorated beyond economical repair. Not so this left-hand drive example, chassis number 'B499LNY', which retains its original drophead coup coachwork by Park Ward Ltd. Delivered to the shippers on 1st October 1952, 'B499LNY' was supplied new via the United States importer J S Inskip to first owner J S Fitch, Esq of Washington, Pennsylvania, USA. Accompanying copy chassis cards show that the Bentley was ordered with various options including flashing indicators; bonnet locks; power operated hood; medium wave radio; sealed beam headlamps; 'Made in England' plate; and whitewall tyres.Unfortunately, nothing else is known of its early history, chronologically the next evidence on file being a State of Florida Certificate of Title in the name of Mary M Coffin of Palm Beach issued on 28th January 2003. The current vendor purchased the Bentley in March 2008 from Fashion Management Europe (purchase invoice on file). A wonderful opportunity to own a handsome and rare coachbuilt Mark VI soft-top, the ultimate in 'fresh air' motoring in its day.Although the current odometer reading states 57,067 miles, this Bentley would benefit from a complete respray and some cosmetic work in the interior. An overhaul of its mechanical components is also required. In addition the soft top has to be restored. However, the chassis looks solid, and the car retains its matching engine numbers.CHASSIS NO. B499LNYENGINE NO. B499N Rare coachbuilt soft-top Mark VI Original left-hand drive model Delivered new to the USA Present ownership since 2008 Matching numbers chassis and enginePrice: $135,000

By placing this call you agree to the Terms and Conditions of Use of this website and that this call may be recorded by Gullwing Motor Cars Inc, using technology powered by Carsforsale.com, for business purposes.

By placing this call you agree to the Terms and Conditions of Use of this website and that this call may be recorded by Gullwing Motor Cars Inc, using technology powered by Carsforsale.com, for business purposes.