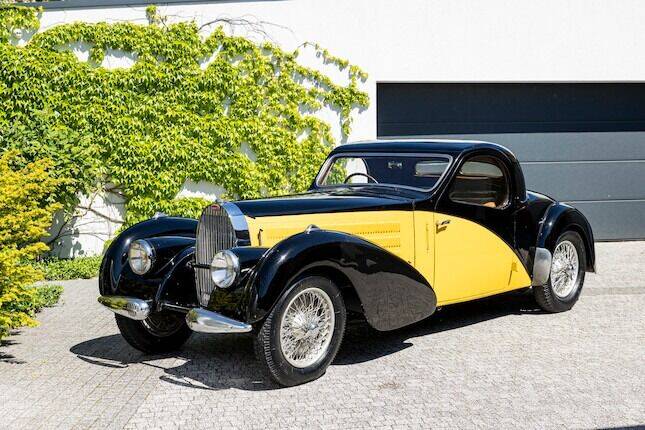 Stunningly Original 1938 Bugatti Type 57C Atalante: 1 of 3 Supercharged Atalante Examples with Aluminum Bodywork. Matching Numbers and with Outstanding Provenance In the years of its existence, Bugatti built many road and race cars that are special. But not many Bugatti road cars are quite as special as chassis 57767, as it is one of only three Atalante that were built to its precise specification, an ultimate specification that makes it one of the fastest and most desirable of its kind. From April 1935 to December 1938, a grand total of only 33 Type 57 chassis were fitted with the breathtaking Atalante coachwork, designed in-house at Bugatti by Joseph Walter under the close direction of Jean Bugatti.Chassis 57767 is the 31st of these rare chassis, and the number 31 is written on the inside of the hood, engraved on the woodwork on the trunk, and written in chalk on the back side of the dashboard woodwork. However, of the 33 Atalante-bodied chassis, only 16 received an aluminum body. In addition, of the 33, only 5 were factory supercharged. To cap it all, only three Atalante chassis were fitted both with the aluminum body and the supercharger by the factory, thereby making these few extraordinary cars the lightest and fastest of them all. This is a truly special and exceptionally rare combination which makes 57767 one of the most coveted Bugatti T57C in the world.On September 6 and 7, 1938, a certain Mr. Albert Cahen of 13 rue Joans in Paris, ordered two Bugattis at the Bugatti Magasin d'Exposition at no. 116 Champs-lyses: a coach Ventoux, chassis no. 57671, and a 57C Atalante which was to be chassis 57767. One must assume that with its four seats and practical body, the Ventoux would be Mr. Cahen's daily driver, while the supercharged Atalante would be used for long high-speed trips or exciting forays into the countryside.Correspondence with the factory dated September 9, 1938 reveals that Mr. Cahen acquired the very last Atalante body (no. 31) that would ever be available from the factory, as bodies nos. 32 (chassis 57733) and 33 (chassis 57788) were already spoken for. Albert Cahen's 57C was finally finished on December 7 and driven from Molsheim to the Bugatti Magasin de Vente at no. 46 rue Montaigne in Paris on December 8, 1938. The driver was none other than M. Touissant, Ettore Bugatti's private chauffeur and operator of Le Patron's daily driver, the world-famous Type 41 La Royale Coup Napolon, chassis 41100, which resides in the Schlumpf Collection in Mulhouse, France.Albert Cahen received his lovely new supercharged Atalante on December 10, finished in royal blue with Havana leather, priced at a massive 116,160 francs, which would have bought four complete Citron Traction Avant, with enough change left over for a nice extended holiday on the Cte d'Azur. But Mr. Cahen could well afford his new and expensive toy: he was the proprietor of a profitable coffee roasting business that marketed coffee products through a chain of stores across France under the name of Caffa.Chassis 57767 was then registered 1916-RM1. This number had appeared on a T57 Atalante that was shown on the Bugatti stand at the October 1938 Paris Salon. Pierre-Yves Laugier does not rule out that that car could have been 57767, perhaps not entirely finished, as Cahen had placed his order in the beginning of September and did not receive his car until December of 1938.A letter from Automobiles Bugatti to Albert Cahen dated August 30, 1939, verifies that chassis 57767 was undergoing repairs due to a camshaft lubrication problem in the Bugatti shops in rue Carnot in the Parisian suburb Levallois-Perret. Little did he know it, but Cahen's days with 57767 were almost over. Hitler invaded Poland two days later on September 1, 1939, and the car was squirreled away.Pierre-Yves Laugier assumes that the car was stored by Bugatti for the duration of the war, likely in the Levallois-Perret premises. At the Paris Salon in October 1948, Bugatti had a small stand and sh