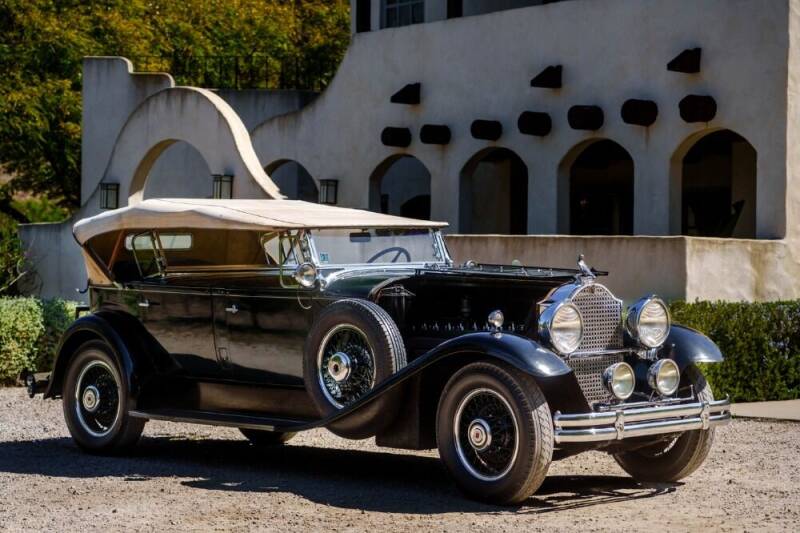 Preservation Class 1930 Packard Deluxe Eight Dual Cowl Phaeton: Seventh Series with Coachwork by Ray Dietrich This 1930 Packard Deluxe Eight Dual Cowl Phaeton is an exceedingly well-preserved example in the desirable Seventh Series with coachwork designed by legendary designer Ray Dietrich. Vehicle No. 185748 has been a multiple Preservation Class and FIVA Award Winner at major events including Pebble Beach and Amelia Island. It shows just 15,628 miles on the odometer, a figure believed to be actual. A low mileage car and impressive for the condition of its original surfaces, mechanical function and the overall survivor qualities that it proudly displays to this day. The dual cowl body style it wears has long been regarded by collectors as being the most desirable configuration and is continually sought after by Packard enthusiasts.Vehicle No. 185748 was delivered 92 years ago, in May of 1930, to Packard Montclair Company, Inc of Montclair, NJ. The known ownership history of the car begins with in both Connecticut and New Jersey (circa 1966). Associated with these early locales in particular is an original luggage suitcase that came in the car's rear mounted trunk-case that is labeled \"Summer Dresses - Mrs. Payne\". The first known owner of record for this Packard is John Westerfelt of Los Angeles, Ca, who acquired the car in the early 1980's. In 2010, Mr. Westerfelt passed away, leaving the car to a friend of his, a Cadillac collector in the State of Pennsylvania. In 2018, the car made its way to Scott Grundfor Company where a thorough mechanical sorting was performed along with general preservation processes to ensure the protection and future usability of this incredibly original Packard.Fitted with what appears to be a 740 Dual Cowl Phaeton body, which is identical in size to a 745, it is our belief that this body has been on the car since new, or very close to it, since these vehicles were almost always custom ordered. The still vibrant largely original paint on the dark green body is impressive for its condition. In a stable state with expected patina throughout, the mere presence of the lacquer, single stage paint lends credence to the notion of a car that has led a charmed 90-year life with minimal use. The rear fenders have received a coat of in recent years to repair a light dent, while the front fenders still retain the original paint. As a compliment to the original paint, the ample chrome throughout the car is in excellent original condition. Of note, and in particularly well-preserved original condition, are the optional front grill that covers the radiator shutters at the front of the car along with the original and less prevalent Adonis (sliding boy) hood ornament. As a detail for Packard buffs, even the original green gem pieces on the headlights remain in place, as are the innovative original Pilot Ray driving lamps that move side to side in concert with the steering. The interior of this survivor Packard is a fitting match for the other original aspects of the car. The driver's compartment is well preserved with original leather, paint, chrome, gauges and wood. The green leather that lines the doors is original as well, a feature of the car that is so undeniably rare for an open car from this era that it is fairly characterized as unique. Gauges and switches in the cabin function properly and remain in original condition. The rear seating compartment offers further original Packard quality to explore. The floor carpets are original as is the carpeting on the footrest while the original chromed frame of the footrest is in beautiful condition. Preservation repair work has been completed on the rear seat back leather and some areas of the original door panels in order to enhance durability for future use, and to prevent degradation while remaining all original. The engine compartment of the car is perhaps the most well-kept original area of the car. This includes not only the mechanical components contained wi